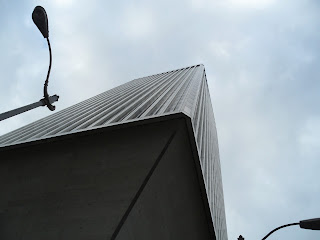 Rainier Tower in downtown Seattle is built on top of an 11-story concrete base that tapers from the bottom of the building to the ground. Some locals call it the "Beaver Building" because the pedestal looks a bit like a tree trunk gnawed by a beaver.

Structural steel frame holds up the floors above the pedestal.  The exterior is anodized aluminum and glass.

That design makes room for more than half a million square feet of office space, while taking up only a quarter of the block.  Before construction started, engineers tested the design for stregnth and stability to make sure it would stay standing through earthquates and high winds.  The odd design eases the "canyon effect" that channels and accelerates win along streets bordered by tall buildings.

Rainier Tower is at 1301 Fifth Ave (Fifth & University). It was finished in 1977 and it's 40-storys tall 514 feet (393 feet without the 121 foot base).  Seattle-born architect Minoru Yakasaki designed it.  He also designed the IBM building across the street from Ranier Tower.  But he's most famous for designing the World Trade Center in New York City.

Rainier Tower's narrow profile at ground level makes room for Rainier Square, which includes stores and landscapred areas.  During the summer, the pedestal acts as a 20 foot movie screen for free movies.


The building and the plaza are named for the old Rainier Bank, the original tennant.  Rainier started out as the National Bank of Commerce in 1889. It became Rainier in 1974 after a public contest to come up with a new name.  Security Pacific bought Ranier in 1987 and it's not part of BankAmerica.

In August of 2010 more than 100 people rappelled off Rainier Tower to raise money for Special Olympics.

The building appeared in the 1980 movie The Changeling, playing the role of Spencer Carmichael Tower.

Here's a picture of the building under construction.  Some nice pictures of the tower now.
Posted by What's That! at 8:42 PM